It’s a season to be jolly, it’s a time to remember that giving is typically better than receiving (unless you get that killer first pressing you’ve had your eye on) and you know that around the world, everyone is hearing more or less the same music in outlet malls, airports and Uber cars. But what about on your lappy or home computer? Let this Vortex Christmas playlist fill the gaps…

John Fahey, a magical guitar player with a full career produced an album of Christmas instrumentals. His interpretations are a pleasure front to back.

Smokey and his Miracles reminds you that you can have Christmas everyday if you got a sweetie that’s sweet on you.

LCD Soundsystem on Christmas is about feeling crushed, hurt and wrecked in the head. But hey, Christmas in NYC is probably always like that.

From Tacoma. The message is more about receiving…

The first meeting of Miles and Wayne Shorter, btw! More on giving and receiving…

Alice Cooper being cheery and stadium-heavy.

And to finish up, Glenn Miller is always a good choice. We also have plenty of Glenn in stock, in case you’re wondering

Out with Malcolm Mooney and in with Damo Suzuki. At this point, the grooves provided by the most well known forerunners of Krautrock got a whole lot funkier… On “Tago Mago” these composers-turned-avant-rockers set a template that still influences musicians and electronic artists to this day with their strange brew of rhythms and sound collage.

“Paperhouse” and the oft-covered “Mushroom” open the album with more standard pastoral psych numbers and Velvet-drones, but the album turns on it’s head with “Oh Yeah” and “Halleluwah,” tracks that seem to last an eternity with simple relentless grooves and studio trickery (backwards voices, fade ins/outs, on the fly mixing).

This is Can’s second breath with Damo on the mic, and his style of vocalizing is unique unto himself. A mix of English, German, Japanese and gibberish, it all goes together in seamless coos, belted screams and “uh huh” nonsense. It’s rock, it’s avant, it stands the test of time… And you can dance to much of it. -Wade

Springing out of the black and white world of The Specials, Fun Boy Three arrived in the early 80′s alongside shiny 2.0 versions of Scritti Politti, The Associates and The Human League.

These groups former years were experimental and dour, but their later careers showed a shared ambition of breaking into pop charts while retaining an experimental and subversive edge. Being on the UK’s Top of the Pops was suddenly more important to the underground than ever, whether it was under personal or political motivation, and it would be a battlefield.

With Fun Boy Three’s “Waiting,” their second-wave Ska roots take a backseat to showcase the studio mastery of David Byrne who at that time was on top of the world after “Remain In Light”-era Talking Heads and work with the B-52s. The Fun Boy Three are accompanied by horns and strings to give them a sophisticated sheen that never clashes with Byrne’s love and use of African instrumentation, and the Boys’s bring their political sloganeering and working class statements to the mix.

The big hit on this disc? What might be seen as a cover of the Go-Go’s “Our Lips Are Sealed” was actually collaboratively written by Go-Go’s guitarist Jane Wiedlin and Fun Boy Three’s singer Terry Hall, but the Go-Go’s had put out their version first. In any case, it was a hit heard around the world, especially across the Atlantic and back again. They had their shining moment as chart-infiltrators during an incredibly interesting time in UK pop music. -Wade 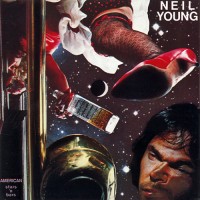 The cover art here was the first thing that caught me. Neil has fallen, his face smooshed down on some glass floor. But from your vantage point you can see all the action above his head; an obscured girl with a bottle, bright stars and crescent moon. Pretty disorienting, and it doesn’t give clues to the content inside…

On this album, Neil stirred up songs that were really intended for other projects and put them on a single platter, making this a looser album made in a pinch. When it was first released that was probably the main gripe of critics, lack of consistency. So, steel guitar and country twang take up a bit of the first side (The Old Country Waltz, Hold Back Your Tears), with spots of heartland rock breaking through (Saddle Up The Palomino, Bite The Bullet). Side two has more of the same; zig zags of country and rock songs, especially the guitar showcase of “Like A Hurricane,” probably his most impressive longplayer after “Cortez The Killer.” Maybe even better. Another great standout on this side is the affecting “Will To Love,” which could put a tear in your beer.

A great smattering of Neil Young material, “American Stars N’ Bars” touches on many a feeling from previous albums like “Zuma” and “On The Beach,” really well at that. I guess he had too many good ideas falling out of his head and this is where they ended up. – Wade 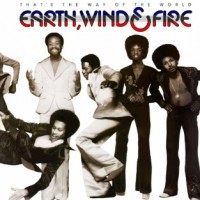 Actually a soundtrack accompanying the film of the same name, “That’s The Way Of The World” set the scene for the world of hit music and record executives. In this perfect world, Harvey Keitel is a successful high-level businessman working with Earth, Wind And Fire as well as The Pages, a newly signed band that represents pastiche and conformity in popular music. Obviously his ties are with the group known later for “Shining Star.”

That single opens up the album and alone is worth the price of admission really, but many other numbers produce the feel-good-get-down hits that Keitel’s character cares about so deeply in the industry… “Happy Feelin” and “Africano” are huge funk grooves with beautiful production.

No matter who you are, the warmth and care from Earth Wind and Fire is infectious. If only for a minute, you can leave your troubles behind and “See The Light.” -Wade

The Grand Funk Railroad song that really caught my attention was their cover of The Animals’ “Inside Looking Out.” The interplay I caught in a live video (YouTube it) showed that this was a principal power-trio; while the group takes you on a journey, there are no pastoral meanderings.

That video has since got plenty of repeat viewings. Meanwhile, the double LP “Mark, Don & Mel” was as close to the essential single experience of GFR that I could hear, next to their other double LP, a hammer of hits in a live document known only as “Live.” Pretty sensible in their monikers, huh? Theses two albums share a number of tracks, the best in my opinion being the thump of “Paranoid” and the gratuitous but always impressive “Into The Sun.” The studio versions of T.N.U.C. and Footstompin’ Music (which also has a fantastic promo-vid, YouTube it) are anthemic and remind you of Rock’s enthusiastic commercial golden age they succeeded in, on their own terms, thanks to the thrifty-and-fast producer work of Terry Knight.

The thing about GFR is that they are technically impressive in the hard-rock vein… They go the distance and segue changes effortlessly but have no ornate flourishes that we’d hear across the pond or elsewhere in emerging prog. Hard Rock enthusiasts, this encapsulates an era. -Wade